Key to the success of the business at Move Realty Wentworthville has been the culture within the organization. Our team shares a passion for Sydney – we love its shops, clubs, cafes and restaurants, a diverse mix of friendly people from many ethnic backgrounds, lovely character homes featuring massive gardens and the growing number of apartments, townhouses and villas.

Reputed schools, universities and educational institutions are a huge attraction to the area. Many homes are in the selective school zones and well known and prestigious private schools. For that reason the Sydney suburbs tends to be a solid family suburb and those who live here often want a backyard for their children to play.

With the unpredictable rise in property prices, many newcomers to the property market can’t afford to buy and Move Realty Property Management is adept at seeking out homes to rent in the area. The office has a great reputation with a strong service ethic and robust systems that ensures landlords and tenants are well-looked after.

Move Realty uses state of the art digital technology to market and advertise homes for sale or rent. Our desire to provide our clients with a positive and memorable experience is always at the back of our good old fashioned values matching the technological progress of the day.

Determining the best sales method and creating the most-effective marketing campaigns with the negotiation skills of the well-educated and experienced professionals to achieve the best price outcome for it’s clients, sets Move Realty apart.

Benefits of selling your property with Move Realty:

From Wikipedia, the free encyclopedia 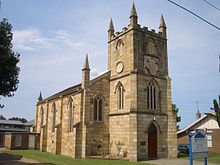 Wentworthville, Wentworth Falls in the Blue Mountains and, Wentworth in far western New South Wales, were named after the Wentworth family. A land grant of 2000 acres (8 km²) in this area was made in 1810 to D’Arcy Wentworth, the father of William Wentworth, the famous Australian explorer, barrister, newspaper publisher, politician and landowner.

Another pioneer to the area, William Fullagar established the Star Inn on the corner of Ettalong Road and the Western Road (now the Great Western Highway). Fullagar also opened a cattle saleyards which became one of the principal ones for the colony.[2] His family’s estate “Essington House”[3] is now the site of a Christian school. Fullagar Road is named after him.

In the mid-1800s, a land boom attracted people into the area, land was subdivided for housing and small farms. Wentworth’s holdings were sub-divided – amounting to 600 lots.[4] The railway line had been put through on its way to Penrith, in 1864, but it was not until 1883 that Wentworthville got its own public railway station. Originally the railway station was called T. R. Smith’s Platform but was renamed Wentworthville two years later.

In 2007 the boundaries were redrawn and the northern part of Wentworthville became the suburb of Constitution Hill.

Wentworthville has two shopping precincts. The larger, older precinct sits on the Holroyd side of Wentworthville railway station (the other side of the railway is part of Parramatta City Council‘s local government area and is mainly zoned residential). A Supa IGA (formerlyFranklins) dominates Wentworthville Mall Shopping Centre.[5]

The newer commercial centre is on the Great Western Highway. It is dominated by Woolworths. Initially Woolworths operated in the main shopping precinct but new premises were obtained at their present location in the late 1980s. (An Aldi sits on the other side of the Highway (which is part of South Wentworthville)).

For many years shopping tours were conducted to the Wentworthville area for the factory-outlets selling their products directly to the public. Bonds clothing factory in Dunmore Street sold direct to the public from their factory.

Wentworthville railway station is on the North Shore, Northern & Western Line of the Sydney Trains network that connects west to Penrith and Richmond. After reaching the city, most trains continue north to North Sydney, Chatswood, Hornsby and Berowra. The station is also serviced by the Cumberland Line linking Blacktown to Campbelltown. The trip to Sydney CBD typically takes 35 minutes.

The Wentworthville station was the site of the first major Tangara accident, a derailment, which occurred on 27 December 1989 [1].

also the S8 bus goes from here to Constitution Hill. [7]

The M4 Western Motorway and the parallel Great Western Highway run east-west through the southern side. The Cumberland Highway runs through the western side of Wentworthville on its way south (from Hornsby via the Pennant Hills Road to Liverpool).

Owning a home is a keystone of wealth… both financial affluence and emotional security.